Anna Valley’s annual Inspiration Showcase is designed to inspire and inform event professionals by demonstrating how the creative application of audio-visual technology can enhance event experiences. In 2022, the event featured an extended reality stage that combined content displayed on video walls with graphics rendered in real-time to create the illusion of scale and provide interactive experiences. Dubbed “The Cloud Horizon” this one stage was used to demonstrate a variety of applications and environments by business development director, Dan Orchard, as he launched Chinese lanterns into the air, customised the colour and specs of his new car, changed the flight patch of a drone and interacted with a three-dimensional robot character in real time. 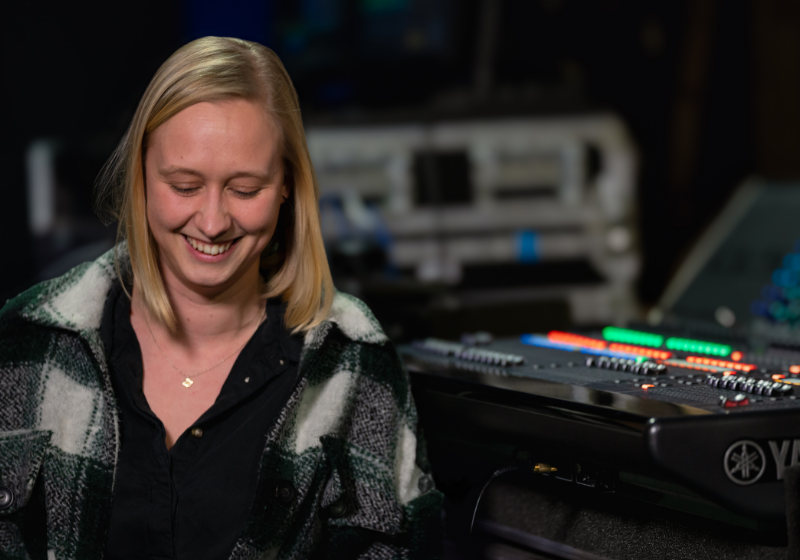 The visual experience was enhanced with a ground-breaking responsive audio design to complete the immersive effect. As far as we’re aware, this is the first solution of its kind and represents a breakthrough not only for Anna Valley but for the industry as a whole.
We chatted with Anna Valley’s head of audio, Lucy Jenkins to find out more.

The showcase is an opportunity for us to invite agencies to come see the new technology we’re working with, watch us push boundaries of technology and try to achieve things we’ve not had the opportunity to do before – whether that’s because the technology is so new, or it’s not been called for on events. It’s a way for us to develop and create really interesting and immersive experiences for our guests.

Describe the immersive audio experience in The Cloud Horizon

The first scene is in an Aston Martin garage with a car on a turntable, surrounded by video content on the LED walls and flooring. Around us, using the PA system that we installed, we were able to map all the sound effects and the audio to move with the content, so you really felt like you were standing next to the car as was being unveiled on this platform.

The next scene was a beautiful lantern parade with a backdrop of lots of Chinese lanterns. This time the presenter could use hand gestures to move the lanterns, change their colour, raise or lower them and set them off into the night sky. And again, the soundtrack beneath that was mapped with the hand movements to create a really majestic piece.

In the final scene there was a drone moving across the LED backdrop and, as the presenter changed the flight path of the drone, the audio tracked to correspond with the speed and height that the drone was travelling at.

How did you achieve this & what tech is involved?

We were using quite a lot of technologies that don’t natively talk to each other. The basis of the system was running a disguise D3 system integrated with an Unreal Engine which then talks to the d&b soundscape system. So, we’re taking positioning information from the Unreal Engine and capturing that into Soundscape so that we can dynamically move the audio around the space based on the position and target information we’re receiving from the Unreal Engine.

Spatial audio isn’t anything new – what’s special about this solution?

The thing that’s really special is the integration between audio and video that we’ve never been able to achieve before. I think what we’re doing here is quite unusual, I don’t know that anyone else has ever tried it before, and it will mean in the long run that we can take an event and move and track people around the space and move their audio with them. It will allow us to create a really immersive experience for our user – that could be in a live environment, in a studio environment, the world is our oyster. There are so many ways that this technology could be used in the future, and this is just a testing ground for that.

We’ve done spatial audio before, but this is really taking it to the next level. Anna Valley has always had a fantastic reputation for video, and this is allowing us to bring in the audio to supplement that to really make the environment we’re building much more immersive.

What prompted you to create this solution?

I want to elevate the level of audio to meet what we’re able to achieve in the realms of video. But also, I want to make a path for us to be able to offer more immersive events, for us to offer something that is truly unique to our clients, for us to really try and take everything we’ve learnt over this week and use it in the real world to elevate events going forward.

Without the showcase we wouldn’t have the opportunity to try out new systems, new ways of working, new ideas to the level that we can do here. It allows us to take that next step forward that may otherwise take us a year, two years, three years to achieve.

Why did you choose an audio specialism?

There’s not that many women working specifically in the corporate events sector of the industry in the audio world and I am really passionate about encouraging that and trying to develop pathways and opportunities for young women who might not have necessarily thought of it as a career previously.

I got into it by mistake I have to say – I was at drama school, and I was studying to be a stage manager and there were so many people in my stage management course – it was so oversubscribed – and there were so few people studying sound theatre. So I switched and it was the best decision I have ever made and I’m very lucky to have been able to make a career out of it, and really lucky to have this opportunity to develop the Anna Valley audio department. I’m excited to see where it goes over the next few years.